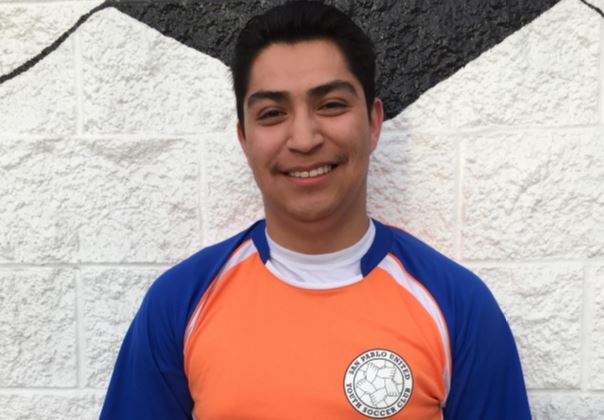 SPUYSC is proud to introduce this quarter’s Player Spotlight, Bryan Jose Moran. Bryan is 19 years old and was born in Daily City, CA. Bryan began to play for SPUYSC at the age of 6 years old and played for various San Pablo teams including the Stompers, Road Runners, Falcons, Crew, Earthquakes, and United.

Bryan attended Stewart Elementary and Pinole Valley High School. He graduated in 2015 and currently attends Georgetown University where he will begin his junior year this fall. Bryan is majoring in International Law with a Minor in Latin American Studies. He plans on becoming a lawyer and practice either Corporate or Civil Law.

Bryan played with SPUYSC for over 13 years before going off to college. However, during school breaks, Bryan continues to devote his time to the club. He assists our Club President, practices with younger and adult teams and recently completed Goalie Soccer Clinics with goalies from most if not all our club’s teams. Bryan credits SPUYSC as one of the reasons for his success. The club has helped him build as a person, has given him a sense of family and a group of people who support him.

SPYUSC is proud to highlight Bryan in our Quarterly Player Spotlight. Bryan represents the core values of our club and what we aspire for each and every one of our players. We wish you continued success Bryan.